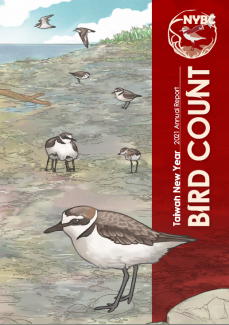 At the time of writing, Taiwan is currently under a Level Three COVID-19 alert which began in May. Level Three restrictions limit certain activities as well as the ability to gather in groups.  However, the 8th Taiwan New Year Bird Count (Taiwan NYBC) was conducted between December 2020 and January 2021, before the level change. The organizers are therefore able to once again present an uninterrupted look at the situation facing migratory birds along the East Asian-Australasian Flyway (EAAF) in 2021. It is hoped that the current Covid situation will stabilize soon and that people will be able to get vaccinated before the next count. With that in mind, the organizers wish to remind readers to follow the rules and guidelines put in place by local authorities to mitigate against the impacts of the current pandemic: stay at home if you can, wear face masks, wash your hands well, and get vaccinated. We are all in this together!

The Taiwan NYBC is a citizen science project which aims to monitor the status and trends of migratory waterbirds in Taiwan proper and its outlying islands. This 8th report represents the results of 2021, and was conducted between December 19, 2020 and January 10, 2021. During the survey, 1,054 participants recorded 328,453 bird individuals from 337 species in 173 circle samples.

These survey results provide comprehensive insights into the distribution and community composition of the wintering avifauna of Taiwan. This has importance for conservation goals along the EAAF as it offers an in depth look at the site usage of a number of migratory bird species. The data is also shared with Wetlands International for use in the Asian Waterbird Census. The organizers would like to express their deep gratitude and appreciation to all the participants, NGOs, donors, and sponsors without whom the Taiwan NYBC would not be possible.

Taiwanese researchers have used NYBC data collected between 2014 and 2021 to create population trajectories to better understand the situation on the ground for migratory waterbirds. Models have been made for Taiwan proper as well as three areas considered migratory bird hotspots: (1) the Changhua Coast in western Taiwan, (2) the Chianan Coast in southwestern Taiwan, and (3) the Yilan Plain in northeastern Taiwan. Of these three areas, the situation in the Yilan Plain is most concerning, with 15 species of waterbird showing significant population declines. This phenomenon was first recognized last year and this year’s data shows no change. The data also showed that Eurasian Moorhen (Gallinula chloropus) numbers have decreased dramatically in all areas. Meanwhile, a government-led removal of invasive African Sacred Ibis (Threskiornis aethiopicus) which began in 2019 has had positive results for resident species. More good news is that the Taiwan NYBC 2021 mascot, the Kentish Plover (Charadrius alexndrinus), maintained stable numbers, even showing a gradual increase in most parts of Taiwan aside from the Yilan Plain. This is promising considering it is one of the major migratory shorebird species found on Taiwan’s tidal flats. Little Ringed Plovers (Chaeadrius dubius) and Grey Plovers (Pluvialis squatarola) also showed significant increases in the Changhua Coast area. Population numbers for other shorebird species decreased significantly however. These numbers serve as a warning for researchers and conservationists that more must be done to ensure the survival of waterbird species in Taiwan, including maintaining and improving the condition of critical habitats such as the tidal flats at the Dadu River Mouth Wildlife Refuge in Changhua County. Maintaining these tidal flats is one of the most important actions that can be taken towards that end. Appropriate conservation actions should also be developed accordingly.

The issue of tidal flat conservation in Taiwan is part of a larger problem facing the EAAF as a whole. Over the last two decades there has been a dramatic decrease in the number of the migratory waterbirds using the migration superhighway, and one of the major factors behind it has been the loss of tidal flats over the last forty years. Tidal flats provide diverse ecosystem functions and services for both wildlife and humans, such as mitigating against the impacts of coastal erosion and the effects of sea-level rise on coastal communities. Moreover, the high abundance of invertebrates and plankton in tidal flats are invaluable sources of food of migratory shorebirds. Yet unfortunately, tidal flat loss has become a serious problem in many parts of the world, especially in the area around the Yellow Sea in East Asia. The organizers are heartened to see that through coordinated international efforts, World Heritage status has been granted to tidal flats in both China and South Korea. These are important steps to help migratory waterbirds on a global scale. Congratulations to all those involved in these efforts!

The EAAF constitutes one of the most diverse flyways in the world, spanning over 20 countries with different cultures, geographies, politics, and levels of development. Therefore, launching an international monitoring network for it, the world’s largest flyway, presents a massive challenge. However, most countries along the EAAF have already created their own nationwide monitoring projects. This includes Taiwan. Yet the data collected only represent the status of birds in a single part of the flyway, just part of the story. Recently, an article in Australian Zoologist reviewed the factors that have hindered the emergence of a flyway-wide shorebird monitoring scheme for the EAAF. These include fragmentation of monitoring databases, low data readiness, inadequate metadata, and survey coverage gaps. The article went on to explain that it will only be through international cooperation and technical skill sharing that solutions to these issues may be found.

The fact is that migration routes cross many boundaries and span many countries. Therefore, all hands are needed to get the full picture. One small, but important example, is that of a globally threatened Far-eastern Curlew named “AAD”. It was banded by a team at the University of Queensland, and arrived in southern Taiwan on March 22nd, 2021. A Taiwanese birder, Mr. Li Zheng-feng (李正峰), spotted the bird as she foraged along a river bank in Tainan and let others know. This caused great excitement in both Taiwan and Australia since Mr. Li, through this simple act, provided an important piece to solving the puzzle that is bird migration patterns! Birds don’t know borders, so it is only through collective efforts that the conservation needs of migratory bird species can be properly addressed. As members of the global community, Taiwan will continue to do its best to monitor, share information on, and conserve the migratory birds along this major flyway.