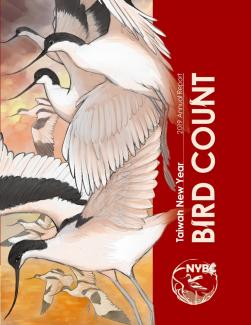 This is the 6th annual report for the Taiwan New Year Bird Count (NYBC Taiwan), a citizen science project used to monitor the status and population trends of migratory waterbirds in Taiwan proper and its outlying islands since 2014. This report represents the results of the 2019 NYBC Taiwan, conducted from December 15, 2018 to January 7, 2019 (23 days). During the event, 1,365 participants recorded 312,948 individuals from 324 species in 179 circle samples. Data collected here will be featured in the “The State of Taiwan’s Birds” report coming out in 2020.

Over the last thirty years, due to serious mudflat loss and the construction of artificial infrastructure along the coastlines of East Asia, migratory shorebird populations have decreased rapidly, especially in the areas around the Yellow Sea, Bohai Sea, and Chongming Dongtan. For example, in the area around Yellow Sea, nearly 30% of tidal mudflats have disappeared in the past three decades. This has had a major impact on the two million migratory shorebirds which rely on the flats to refuel and rest along their migratory path. Coastal development in China has already reached 11,560 km (roughly 58% - 61% of China’s coast), far surpassing the more popular Great Wall of China (7,300 km)! This “New Great Wall” has led to a significant decline in mudflats and the shorebird populations that rely on them.

The mascot for the 6th NYBC Taiwan was the Pied Avocet (Recurvirostra avosetta). NYBC data from 2014 to 2018 showed that the population of Pied Avocet wintering in Taiwan increased significantly over that period. This positive trend is quite different from that of other waterbirds surveyed. So why choose it as the mascot? Organizers agreed that while it is important to raise awareness about a species with a declining population, it is also important to share good news such as that of a recovering population status.

Monitoring methods for NYBC Taiwan follow the same fundamentals as the Christmas Bird Count. Over the course of 23 days (with January 1st serving as a midpoint), volunteer teams choose a consecutive 24-hour period to count the birds within a circle sample area whose radius is three kilometers.

Our datasets provide valuable information about the distribution and community composition of the wintering avifauna of Taiwan. This information is kept in an open database administered by Taiwan’s Environment Protection Administration. Results are also shared with Wetland International’s International Waterbird Census and the School of Biological Sciences at the University of Queensland in Australia. NYBC Taiwan will continue to work diligently and collaborate with the international community to monitor the status of migratory birds of the East Asian-Australasian Flyway.

NYBC Taiwan is organized by the Chinese Wild Bird Federation (CWBF), the Wild Bird Society of Taipei (WBST), the Kaohsiung Wild Bird Society (KWBS) and the Taiwan Endemic Species Research Institute (TESRI). Organizers would also like to point out that the event’s success would not be possible without the hard work of key people such as Allen Lyu (CWBF), Chieh Chang (CWBF), Scott Pursner (CWBF), Kung-Kuo Chiang (WBST), Kun-Hai Lin (KWBS), Reuy-Shing Lin (TESRI), Yong-Lun Lin (TESRI), Arthur Bureau (TESRI) and Da-Li Lin (TESRI). They would also like to express their deep gratitude and appreciation to all the participants, NGOs, donors, and sponsors without whom none of this would be possible.